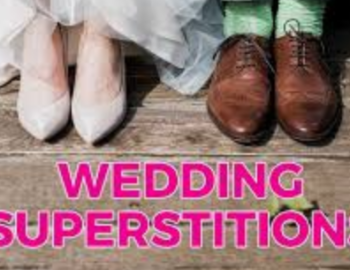 This custom trace its roots back to Rome. Fearing evil spirits were jealous of her happiness, the bride would wear a veil down the aisle to disguise herself from them and avoid any ill they will bring upon her.

RAIN ON YOUR WEDDING DAY

In some cultures, rain on your wedding day symbolizes fertility and cleansing.

CARRYING THE BRIDE OVER THE THRESHOLD

This superstition began in medieval Europe, when many believed that a bride was extra vulnerable to evil spirits through the soles of her feet. To avoid bringing in any evil spirits, the groom carried the bride into their new home.

Bells are traditionally chimed at Irish weddings to keep evil spirits away and to ensure a harmonious family life.

In Italy, many newlyweds smash a vase or glass at their wedding, and they put a lot of muscle into it, too! Why? According to tradition, however many pieces the glassware breaks into will symbolize how many years the couple will be happily married.

CRYING ON YOUR WEDDING DAY

It is supposed to be good luck for the bride to cry on her wedding day because it symbolizes that she has shed all her tears and will not have any to shed during marriage.

SEEING EACH OTHER BEFORE THE WEDDING

This superstition dates to the time of arranged marriages, when people believed that if the couple saw each other before the ceremony, it would give them a chance to change their minds about the wedding day and bring shame to the family.

RING ON THE 4TH FINGER

Engagement and wedding rings are worn on the fourth finger of the left hand because it was once thought that a vein in that finger led directly to the heart.

In many cultures around the world—including Celtic, Hindu and Egyptian weddings—the hands of a bride and groom are literally tied together to demonstrate the couple's commitment to each other and their new bond as a married couple (giving us the popular phrase "tying the knot").

THE BRIDE STANDS ON THE LEFT

The bride stands to the groom's left during a Christian ceremony, because in bygone days the groom needed his right hand free to fight off other suitors.

According to Greek culture, placing a sugar cube on the bride will sweeten the marriage.